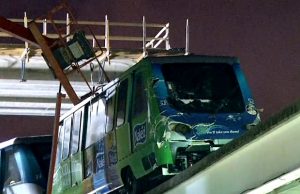 Two workers were rushed to the hospital early Wednesday after an accident at a Brightline construction site in Miami.

Miami Department of Fire-Rescue officials were called to a Metromover car near Northwest First Avenue and Northwest Fifth Street just before 1 a.m. They found that one person fell from a nearby crane boom, while another was left dangling from a ledge.

“We understand that a Metromover rail car slammed into an elevated bucket boom here at the construction site off of Northwest First Avenue and Fifth Street,” Miami Department of Fire-Rescue Capt. Ignatius Carroll Jr. said. “We understand that they were both positioned inside this elevated boom when the Metromover struck the boom. We’re not sure exactly where it was placed.”

The two victims were ejected from the crane boom after the Metromover car crashed into it. Both were wearing safety equipment at the time of the accident, according to rescuers.

“(There’s) not enough safety (and) not enough experts looking at what needs to be done for safety,” construction worker Carl Taylor said.

One of the workers was left dangling from a safety harness and was helped down by other workers, while the other fell to the ground.

“We understand that fellow co-workers came to their aid to assist one of them that was pretty much dangling up on one of the construction site areas, and the other one that was already on the ground,” Carroll said.

The two construction workers were taken to Jackson Memorial Hospital’s Ryder Trauma Center, where one of the workers, Oscar Cabrera, 43, was later pronounced dead. The other victim, Luis Perez, 37, was treated at the hospital and released.

“It’s very unfortunate,” construction worker Paul Mincey said. “I pray for the family, you know, for the person that got injured and the one that didn’t make it. That could have been me as well.”

Local 10 News reporter Terrell Forney spoke to the victim’s wife, who said the couple was married for 20 years.

She said her husband has no biological children and learned about the accident through one of his co-workers. She said she has not heard from the construction company for which he worked.

No passengers were on board the Metromover at the time of the accident.

Miami-Dade County Transit has announced that the Metromover will not be running Inner Loop on Wednesday morning. A free bus shuttle will be provided between Government Center and Miami Avenue.

Suffolk spokeswoman Kim Vaughan released a statement later in the morning saying, “We learned about this terribly sad incident early this morning, and our thoughts and prayers are with the families of the two individuals involved. We are currently working closely with the Miami-Dade Police Department, Miami-Dade Transit and OSHA as they continue to investigate the cause of this accident.”

Baker Concrete Construction, which is the subcontractor that employed Cabrera, also released a statement, saying they were “heartbroken over the death of our co-worker.”

The construction company said it was fully cooperating with authorities in the investigation.