Despite enormous economic headwinds and sky-high unemployment numbers, President Donald Trump sought to showcase his record as a job creator on Thursday during a visit to a shipyard in the battleground state of Wisconsin.

Trump boasted of his “aptitude for manufacturing” and again offered a rosy prediction that the coronavirus-battered economy is set to turn a corner even as the U.S. marked its 14th straight week with more than a million workers making unemployment claims.

Trump made the comments during a tour of the Fincantieri Marinette Marine shipyard, the recent winner of a $5 billion federal contract to building up to 10 new guided missile frigates. The Marine shipyard is a United States subsidiary of Italian enterprise Fincantieri, one of the world’s largest shipbuilders.

Wisconsin, a state he narrowly won in 2016, is expected to be one of the most hotly contested battlegrounds as Trump looks toward his reelection effort.

“I understand manufacturing,” Trump said during an address to the shipyard employees. “Remember, manufacturing was never going to come back. Well, it did come back. It came back big.”

But times have changed in Wisconsin and throughout the country.

Unemployment has surged to 12% in Wisconsin, a rise on par with job losses nationwide because of the pandemic. When Trump last campaigned in the state in January, the unemployment rate was 3.5%.

Trump’s standing in Wisconsin appears to be suffering from the extraordinary period of turmoil, and his visit was part of a concerted effort to shore up support in friendlier areas that can make or break his reelection chances. The trip came days after he dispatched Vice President Mike Pence to the conservative Milwaukee suburbs. 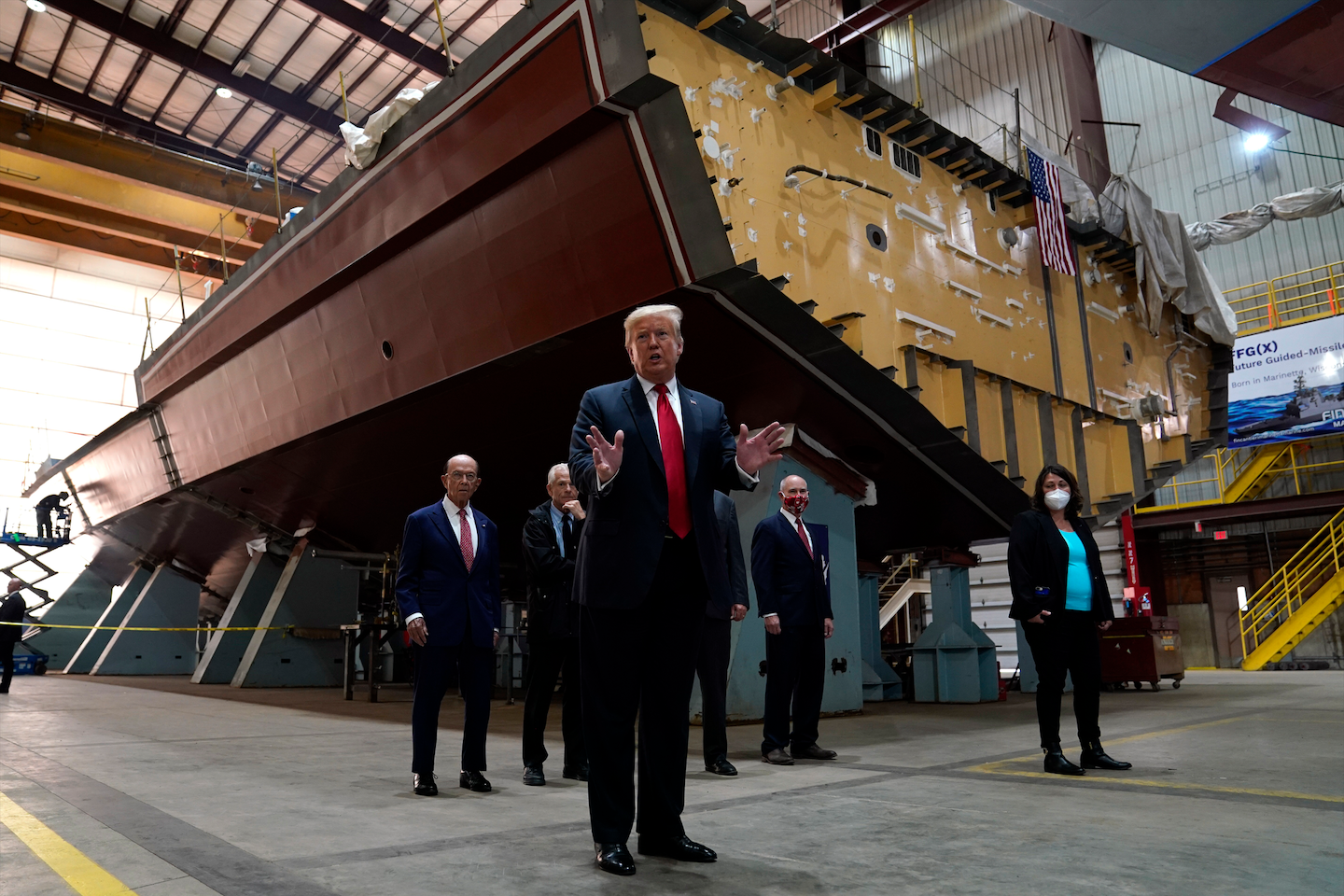 Before his visit to Marinette, Trump participated in a town hall, later aired by Fox News Channel, from an airport in Green Bay. Trump used the town hall to repeatedly attack Biden’s acuity and lash out against former national security adviser John Bolton over his tell-all book. He also warned that the potential defeat of longtime Rep. Eliot Engel in Tuesday’s New York primary is a sign of the growing strength of the “radical fringe” in the Democratic Party. (The Associated Press has yet to declare a winner in that contest.)

The two parts of Wisconsin that Trump targeted this week — suburban Milwaukee and the Green Bay media market in northeast Wisconsin — are areas where he needs to run up a big vote advantage in November.

Trump noted that he has pushed for a 355-ship Navy fleet by the end of his first term, though left unsaid is that the Navy is on track to have have just over 300 ships by 2025. Still, Trump knocked Democrats as doing too little for the military.

“I will tell you that Democrats don’t like approving money for the military for whatever reason,” Trump said.

Some polls have suggested Trump has ground to make up in Wisconsin. A Marquette University Law School poll released Wednesday showed Democrat Joe Biden with an 8 percentage point lead over Trump. Trump trailed Democrat Hillary Clinton in nearly every poll conducted in Wisconsin in 2016 — often by similar margins — before he won the state by fewer than 23,000 votes.

Marinette County helped deliver that win. Trump carried the county, about 170 miles (275 kilometers) north of Milwaukee along the shores of Lake Michigan’s Green Bay, with 65% of the vote.

Unlike Trump’s rally in Oklahoma last weekend and his visit to a Phoenix megachurch Tuesday, his tour of the Fincantieri Marinette Marine shipyard was not open to the public.

Trump, who generally refuses to cover his face, did not wear a mask for his speech at the shipyard, though many of the employees who gathered for the address did.